This case study is located in the north-western part of France. The area includes the bay of Mont Saint-Michel, which is listed by UNESCO as world heritage, and Cancale bay, which does not belong to the Normandy Region per se, but is in the same ecoregion. On a whole, the length of the coastline is about 450 km, and the total area is around 20 000 km2 (including terrestrial and marine zones). The area does not include Channel Islands which are independent and have their own administration.

Shellfish aquaculture dominates in several places along Normandy coasts, mostly in sheltered areas (bays, estuaries). Two species are cultivated: the Pacific oyster, Crassostrea gigas, and the blue mussel Mytilus edulis. Oysters are placed in plastic bags fixed on metallic tables moored in the sediment. The tables are about 70 cm above the sediment. Mussels are generally cultivated on wooden poles. For the whole area (Normandy including bays of Mont Saint Michel & Cancale), oyster annual production is around 34 000 t and total mussel annual production averages 29 000 t.

Marine fish aquaculture is represented through 2 salmon farms. One farm is located in the harbor of Cherbourg in the northern part of Cotentin, where salmons are bred in cages. The second one is a land-based farm located in the eastern part of Cotentin, where salmons are produced in a sea water recirculation system. The total annual salmon production is 2000 t.

Normandy represents a series of economic, cultural and environmental issues due to a large panel of activities (e.g. shellfish farming, tourism, commercial fishing, agriculture, nuclear power plant, fuel processing industries, sand gravel extraction and, in the future, offshore renewable energy) and a complex governance system inherited from several administration. Issues have been identified in a report by the French Agency for Marine Protected Area [1] as following:

A GIS tool based on AkvaVis (www.akvavis.no), which has been originally developed by IMR and CMR Computing (Norway) has already been adapted to Normandy. The fundamental concept of AkvaVis consists in integrating information, model simulations, and regulatory framework with expertise by applying a web based dialogue and by allowing instant response from simulations to the user. Initially applied to the Normandy region to identify potential areas for aquaculture and optimize aquaculture (e.g. select areas with higher environmental quality, lower risk of infection by pathogens and mortality, better growth), it will be expanded to all spatial information necessary to minimize conflicts between aquaculture and other uses.

The French AquaSpace team held a stakeholder workshop on March 2nd 2016 in Caen. The WS was co-organized with the national authorities (French Ministry of Environment, Energy and Sea), more specifically the Inter-Regional Direction of the Sea (DIRM) and the Departmental Directions of Territory and Sea (DDTM). The WS was physically held at DDTM of Calvados Department and was specifically dedicated to the AquaSpace project.

A total of 28 persons (without Ifremer) from 18 organisms participated to the WS which was managed by the Ifremer AquaSpace team.

The WS started with several presentations:

Then, exchanges with stakeholders were organized with the objectives of i) identifying & ranking the data needed to implement aquaculture spatial planning in the area, ii) verifying the existence & availability of these data and precise their format. Two working groups were set up, each of them managed by 2 Ifremer participants. An immediate restitution of the working groups and an open discussion about the issues of aquaculture development in the area took place in the last part of the WS.

Main issues regarding to aquaculture development in Normandy have been identified on the basis of exchanges during the WS and consultation of the French Strategic National Plan for Aquaculture Development (PSNPDA, [2]): 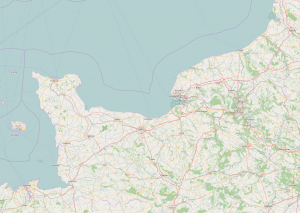 Map of the Normandy Case Study 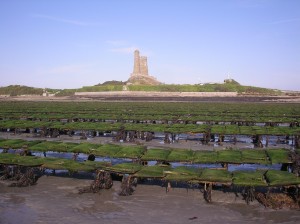 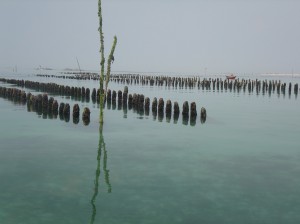