This case study is located in the Northern Adriatic Sea, along the coastline of the Emilia-Romagna region. The study area is comprised between the 3 and 12 nm in a box of coordinates 12.30 west, 12.93 east, 44.84 north and 43.97 south, with a total area of 1561 km2. Mussel farms are presently located in the coastal area, mostly within 3 nm miles from the coast. Clam farming is practiced in leased area within the coastal lagoons nearby the river Po Delta.

Compared with other areas in the Adriatic, primary production is enhanced by the nutrients delivered by the Po River: as one can see from the satellite maps presented in Fig. 1, the concentration of Chlorophyll a decreases, in general form north to south. The area is therefore suitable for shellfish farming, with mussel seeds reaching the market size in approximately 9 months. 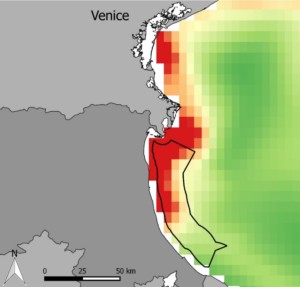 Mean concentration of Chlorophyll in 2015 from remote sensing (source: http://mcc.jrc.ec.europa.eu/emis/)

In Italy, the implementation of the Maritime Spatial Planning Directive is entrusted to each “Regione”. The Regione Emilia-Romagna is promoting shellfish aquaculture with the aim of creating a sustainable and complementary activity to both the fishing sector and the food industry operating within the region. However, AZAs have not been defined as yet.

At present, the Emilia Romagna account for the 20% of the Italian production of Mediterranean mussel Mytilus galloprovincialis, and for the 58% of Ruditapes philippinarum. However, research and pilot studies have demonstrated that the area would be suitable for developing the culture of the European flat oyster Ostrea edulis and the Pacific oyster Crassostrea gigas.

At present, suspended mussel culture is carried out in longlines using socket of plastic material. The disposal of this material according to the current legislation represent an extra cost for farmers. Furthermore, its accidental release at sea in storm events represent a significant impact, leading to increase the amount of plastic macro-litter. In order to reduce costs and impact, the adaptation of the Japanese longlines system, to the case study area is presently being investigated. This technology, which is currently successfully being used, in particular, in New Zeeland, would require the reallocation of some farms in deeper areas.

Shellfish culture, mainly Mytilus galloprovincialis in the coastal area and Ruditapes philippinarum in coastal lagoon, is a well-established activity in Emilia-Romagna: the total annual production was about 40.000 t in 2013, with 21.552 t of mussel and 18.994 t of Manila clam. The sector involves about 1700 operators and 83 companies and represents an important complementary activity to fishery, which is experiencing some difficulties, due to the decrease in landings.

Stakeholders were consulted at a workshop organized in Chioggia in November 2015. Farmers, researchers and representatives of environmental agencies agreed in indicating the excess of bureaucracy as the main factor inhibiting the further development of shellfish culture in the area. The implementation of MSP and definition of AZA was regarded as highly beneficial, as it could speed up the concession of leased area: now a new investor would take about two years to get a license. The lack of a unique reference contact point for assisting the leasing process and, in general, assisting farmers in complying with the current legislation was pointed out as a major issue. The profitability of the activity was also of great concern: to this regards, farmers would encourage research aimed at supporting the diversification of farmed species.

This case study will implement and assess a tool for site selection based on Spatial Multi Criteria Evaluation, being developed by Bluefarm, and a tool for Ecosystem Cost and Benefit Analysis, to be developed in Aquaspace WP3. The first tool is based on the mapping of constraints to the further development of shellfish culture and suitability criteria, which will be aggregated in a spatially explicit suitability index. Constraints will take into consideration conflict of uses and criteria will include productivity, environmental impacts and socio-economic ones. The second tool will place more emphasis on socio-economic drivers and impacts and will be tested also in other AquaSpace case studies.

The results of Aquaspace project will support local authorities involved in the implementation of the Maritime Spatial Planning directive as well as farmers and investors who may wish to start new business in the shellfish industry in the area by providing science-based tools for allocating new leased areas along the Adriatic coast line or reallocating existing farms in view of adopting different farming technologies.

Europe is importing a huge amount of seafood, including shellfish, which means that there is scope for growth for shellfish farming, should an increase in EU production be accompanied by adequate marketing strategies. Reducing the time required for getting licenses and selecting appropriate sites using science-based site selection tools represent mandatory steps towards the further development of this non-fed and environmentally friendly type of aquaculture.