Long Island Sound (LIS) is a large estuary (3,259 km2), located between Connecticut (CT) to the north and Long Island, New York (NY) to the south. Three major tributaries, Connecticut, Thames and Housatonic Rivers, enter from the north, the Sound is connected to the Atlantic Ocean at its eastern end and connects to the East River and New York Harbor to the west.  Tidal height is 1.9 m and average depth is 20m. Residence time is 2-3 months. The watershed area is 12,773 km2 and includes parts of Vermont, New Hampshire, Massachusetts, Connecticut, Rhode Island and New York. The watershed is highly developed, particularly in the New York City and New Haven, Connecticut metropolitan areas. The watershed population in 2010 was about 8.93 million people with nearly half the population living near the coast. The overall average population density is 121 persons/km2 but locally it is much higher; 2,151 persons/km2 in the New York metropolitan area and 541 persons/km2 in the New Haven, CT metropolitan area. The largest land use is forested (70%) with urban areas making up 16% of the watershed.  Activities in the watershed contribute to state and local economies, but have taken a toll on its environmental health. Severe water quality degradation and critical habitat loss have resulted from a multitude of anthropogenic activities along its coastline. 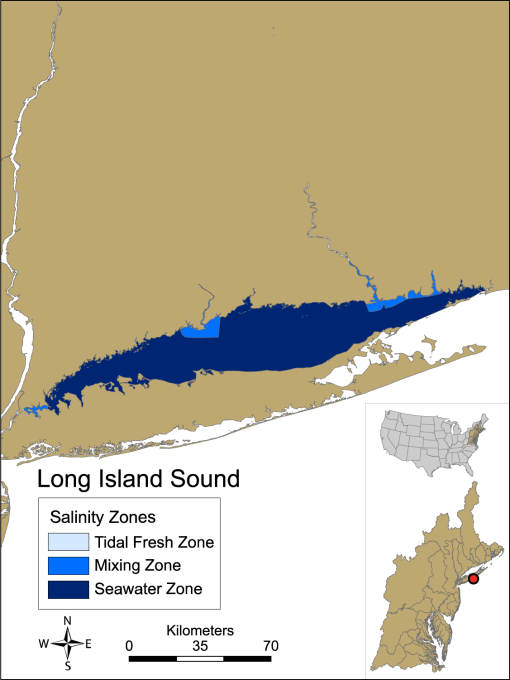 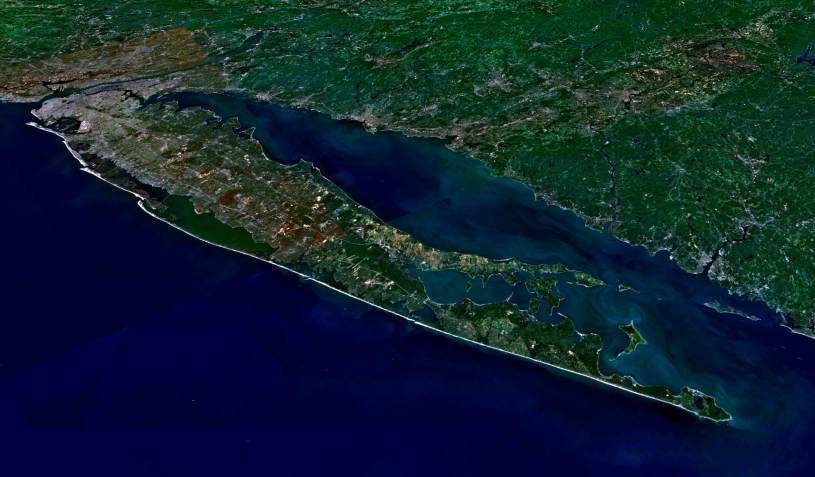 The shellfish industry in Long Island Sound supports about 45 shellfish growers in Connecticut waters and an unknown number in NY. The industry includes harvest of both Eastern oyster (Crassostrea virginica) and hard clam (quahog) (Mercenaria mercenaria) from shellfish grounds in the states of CT and NY.  Recent cultured and wild caught hard clam and oyster harvests in LIS have provided over 300 jobs and $30 million in revenue annually. Clam and oyster harvests are shown below.

Oyster production grew in the 1980s and 1990s due to successful oyster culture practices which typically grow oysters and clams on the bottom with no gear. A typical harvest size oyster is about 90g at the legal length for harvest of 3 inches (7.62 cm). The large commercial oyster industry peaked in 1992 and declined mainly due to MSX, a parasitic disease. Oyster harvests began to rebound in 2006. Since 2011, CT harvest data have not been available, but resource managers believe that harvests continue to rise. In 2012, there were 127,884 acres of approved oyster harvest area in CT, 99,132 acres conditionally approved, 138,849 acres restricted and 23,384 acres classified as prohibited from shellfish harvest. In NY, there were 412,018 certified acres (equivalent to approved acres in CT), 1,613 seasonal (harvest allowed only during specific months of the year – similar to conditionally approved in CT), and 75,499 acres where shellfishing was prohibited. Within the approved and conditional acres in the CT side of LIS, there were a total of 66,042 acres of leased shellfish growing area; 49,463 state leased and 16,579 town leased acres.

There are plans to expand aquaculture operations in the future, and though >90% of current producers are using bottom culture with no gear, future development will likely be floating culture. However, future expansion will be difficult in this  highly urban waterbody due to concerns (described as ‘social carrying capacity’) of waterfront landowners   who do not want to see floating bags or working farms in their viewscape, and boaters who do not want to risk boats getting entangled in culture gear.